For the past few years, a new and somewhat controversial pedicure option has been available in the UK. A fish foot spa pedicure is a form of luxury treatment wherein very small scavenger fish are enlisted to exfoliate and clean the skin of the feet.

When this concept was first introduced in 2011, it was wildly popular; however, popularity has waned as concerns have been raised about the possibility of the spread of disease from one spa customer to another.

How does a fish spa treatment work? 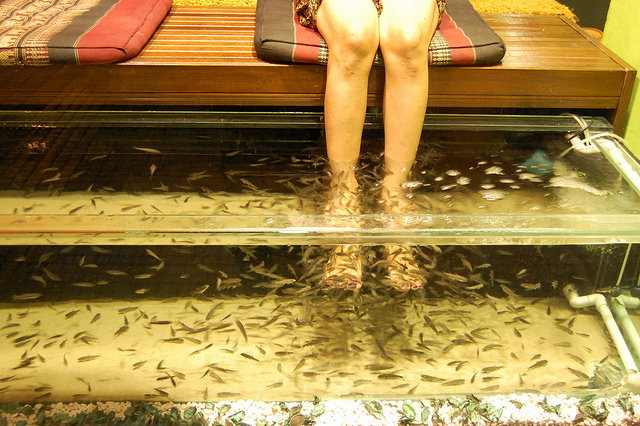 For fish spa therapy, the spa customer must place his or her feet into a tank of warm water with a school of Garra rufa fish. These toothless little minnow-like fish, which hail from the rivers of Iraq, Iran, Syria and Turkey are also known as “nibble-fish” or “doctor-fish”. They work by nibbling and sucking away the dead, dry skin on your feet. This treatment is purported to leave you feeling healthy and refreshed.

People seeking this treatment should be aware that another species of fish is sometimes mistakenly used for this sort of treatment. The Chinese Chinchin is very similar to the Garra rufa, with one important exception. This type of fish has teeth and may draw blood. This is not only painful, it also greatly increases patrons’ risk of contracting an infection.

Is this treatment really dangerous to your health?

According to Health Protection Agency (HPA) experts, the risk of the spread of disease through the use of nibble-fish is quite low, still it does exist. For this reason, in October of 2011, after a thorough investigation into the matter, the agency issued updated advice on the use of this practice.

Customers seeking this type of treatment must be aware that fish tanks contain many different kinds of microorganisms. For this reason, there is certainly the possibility of contracting an infection when you put your feet into water that houses fish and which has been used by other spa patrons before you. According to the HPA, spas that do not reuse the same tank of fish greatly reduce the chances of spreading infection.

Nonetheless, the agency cautions that people who have chronic medical conditions, such as psoriasis or diabetes, or who have weakened immune systems should not use this form of therapy. These conditions can predispose a person to be at a much greater risk of developing an infection.

Furthermore, people who have any sort of infection or wound on the feet should not use this form of therapy. Additionally, if you have shaved or waxed your legs within the past 24 hours, you should abstain from fish spa therapy.

Why would you want a fish pedicure?

Proponents of this form of therapy claim that using Garra rufa fish to nibble away dead skin and exfoliate existing skin is a good way to stimulate the flow of blood and promote healthy blood circulation. They also say that this treatment removes bacteria and reduces foot problems such as athlete’s foot, eczema, psoriasis and foot odour. Aesthetically, the treatment is intended to leave the feet soft and smooth.

More exotic claims include the assertion that the fish stimulate acupuncture points, thereby easing fatigue, relaxing the body and regulating the central nervous system. You should be aware that these claims have not been scientifically proven and that there have been few studies examining their veracity.

There was one Austrian university study that seemed to indicate that fish pedicures could be helpful for people with psoriasis; however, it is worth noting that this study was conducted in a controlled university lab environment – not at a nail salon. This is an important distinction.

Is fish spa therapy really worth the health risks?

When considering use of this off-beat form of therapy, consider the old adage that asserts that if something sounds too good to be true, there is no doubt it is just that. As a case in point, consider that the National Eczema Society has debunked all claims that this treatment is helpful for eczema. In fact, they have issued a statement saying that people with eczema will only complicate their problems and increase the risk of infection via this method.

Likewise, the Psoriasis Association has cautioned psoriasis sufferers against fish spa therapy. They say that the possibility of getting an infection from exposure to the fish and the water is too great. This is due to the fact that people with psoriasis often have foot lesions, tend to have weakened immune systems and may be taking prescription medications that would predispose them to respond unfavourably to this treatment.

Patrons should also be aware that, even without fish, foot baths in nail salons have been known to cause outbreaks of serious infections (e.g. nontuberculous mycobacterial infection) which caused severe illness, suffering and scarring of those affected.

Is it true that fish pedicures are banned in some countries?

Although the Centers For Disease Control in the United States have not identified any specific outbreaks of disease associated with fish spa treatments, ten US states have taken the proactive step of banning this practice. The reason for this is that the fish tubs cannot be properly sterilised between patrons without killing the fish. Furthermore, even when the fish are moved to a clean tub and clean water, they may still carry the potential for spreading disease. It is not possible to disinfect or sanitise a living organism.

Disposal of the fish after each treatment would be costly, cruel and potentially hazardous to the environment. According to the US Fish & Wildlife Service, Garra rufa have high potential for becoming invasive due to their hardy nature and ability to adapt. If they were to make their way into the waterways, it could pose a real threat to native aquatic, plant and animal life.

Is it smart to get a fish foot spa treatment?

In the final analysis, it seems much wiser to forgo this treatment. In addition to the problems already mentioned, there are a number of problematic issues surrounding this practice.

For one thing, a fish pedicure is not in compliance with the legal definition of the term “pedicure“. For this reason, if you do experience problems you might also experience extreme complications in attempting to get restitution.

Secondly, the keeping of these fish breaks rules that apply to spas and salons. For example, one regulation requires that fish kept at a salon be housed in an aquarium – not a foot bath or a tub.

Furthermore, the treatment of these animals as a product or commodity is exploitative. They do not naturally eat dead human skin. They have to be starved in order to make them perform this “service”. As if this were not bad enough, they are often simply disposed of at the end of the day.

All-in-all, it seems far wiser to exfoliate and refresh your feet using standard spa methods such as warm, aromatherapy soaks, massage, pumice stone and luxurious foot cream. These tried and true methods are pleasant, safe and not loaded with bad karma.